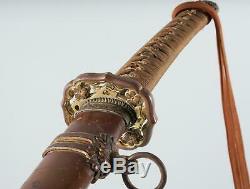 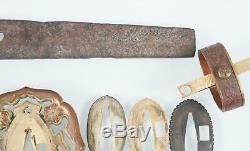 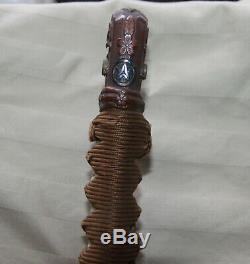 This is an extremely nice example of a WW2 Japanese Army Officers Shin Gunto. It is mounted with a very nice old koto blade. The early high quality type 94 koshirae with pierced tsuba remains in exceptionally nice condition. Japanese Army Officers Shin gunto Sword with a very rare Colonel Grade Tassel. The sword blade is very old and dates from no later than the late 1650s. This is mounted in above average military pattern fittings and the gilt is almost completely intact on the handle and on the scabbard as well. To the Japanese Army officer a Sword was a sacred symbol that conveyed high social status. This was a family heirloom that was re-purposed into the regulation Army Officers Shin Gunto Sword and would have certainly had great sentimental value to the Japanese Army Colonel who carried it as a badge of rank. The Japanese Military Officers Samurai sword was the most prized war trophy of the Pacific War and it was an iconic symbol of the Japanese ethos of Warfare.

This item is in the category "Collectibles\Knives, Swords & Blades\Swords & Sabers\Asian\Japanese". The seller is "zilvra10" and is located in Chicago, Illinois. This item can be shipped to United States.