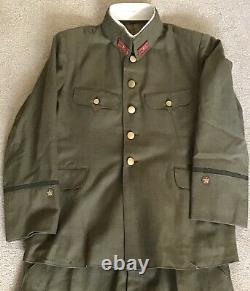 A WW2 Imperial Japanese Army officers Type 3 uniform. The Type 3 was an officers only uniform and was introduced in 1943. It was similar to the Type 98 uniform and reintroduced cuff insignias consisting of stripes of dark green or brown braid on the cuff to indicate company, field or general officers. This example belonged to a 2nd lieutenant indicated by the collar insignia.