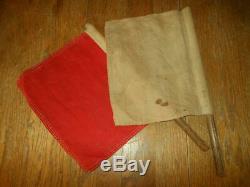 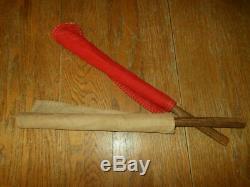 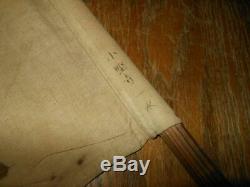 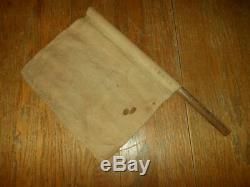 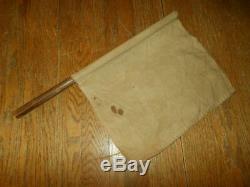 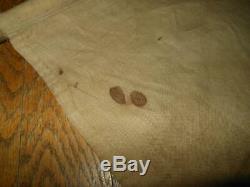 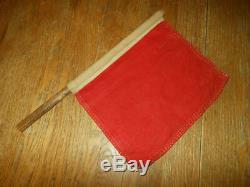 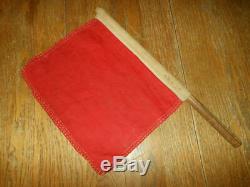 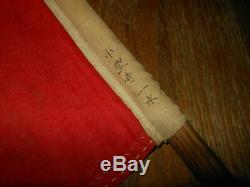 This comes complete in the original storage/transport bag. Flag semaphore from the Greek. Sema, meaning sign and , phero, meaning to bear; altogether the sign-bearer is the telegraphy system conveying information at a distance by means of visual signals with hand-held flags, rods, disks, paddles, or occasionally bare or gloved hands. Information is encoded by the position of the flags; it is read when the flag is in a fixed position. Semaphores were adopted and widely used (with hand-held flags replacing the mechanical arms of shutter semaphores) in the maritime world in the 19th century.

It is still used during underway replenishment at sea and is acceptable for emergency communication in daylight or using lighted wands instead of flags, at night. The Japanese Navy adapted the flag semaphore system to the Japanese language. Because their writing system involves a syllabary of about twice the number of characters in the Latin alphabet, most characters take two displays of the flags to complete; others need three and a few only one. The flags are specified as a solid white square for the left hand and a solid red one for the right.

The display motions chosen are not like the "rotary dial" system used for the Latin alphabet letters and numbers; rather, the displays represent the angles of the brush strokes used in writing in the katakana syllabary and in the order drawn. For example, the character for "O". , which is drawn first with a horizontal line from left to right, then a vertical one from top to bottom, and finally a slant between the two; follows that form and order of the arm extensions.

It is the right arm, holding the red flag, which moves as a pen would, but in mirror image so that the observer sees the pattern normally. As in telegraphy, the katakana syllabary is the one used to write down the messages as they are received. Also, the Japanese system presents the number 0 by moving flags in a circle, and those from 1 through 9 using a sort of the "rotary dial" system, but different from that used for European languages.

Manufactured in a lightweight cotton and wood, this is a VERY RARE set, not commonly seen on the market (though there are a few companies that make reproductions). Each flag remains in SOLID condition for it's age, but they does show some marks and wear from use. Features numerous Kanji markings and stamps!

Probably produced later in the war. A PERFECT addition to any collection or display! Most of my items are vintage, and as such are AS-IS, so you must therefore expect a degree of wear due to age and/or usage. Although my passion is the Me109, I do offer many other German Aircraft Fw190, Me262, etc. , as well as USAF and Japanese items.

Occasionally I do offer many non-vintage items such as prints and art relating to the time period. Use is solely based on my authorization only. The item "WW2 Imperial Japanese Navy SEMPAHORE SIGNAL FLAGS VERY RARE" is in sale since Saturday, March 9, 2019. This item is in the category "Collectibles\Militaria\WW II (1939-45)\Original Period Items\Japan\Other Japanese WWII Orig Items".

The seller is "messerschmitt*109" and is located in Studio City, California. This item can be shipped worldwide.