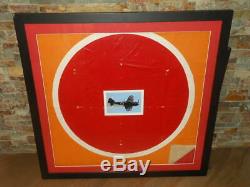 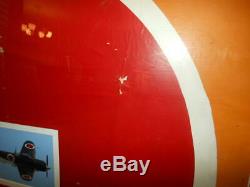 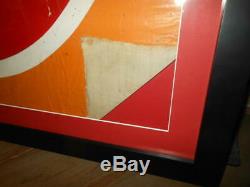 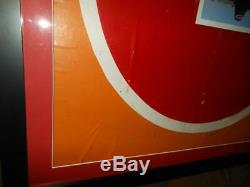 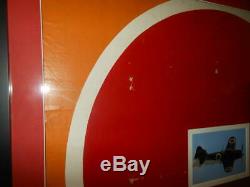 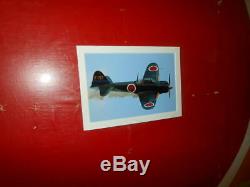 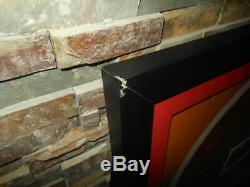 This piece was cut from the aircraft by a US vet during the war while stationed in the Pacific Theater. This type of fabric covered the aluminum aircraft skin on the flaps, ailerons, and rudder of the aircraft! This was fairly universal on most aircraft control surfaces during WW2, however some planes were entirely covered with fabric. Made of lightweight fabric, this section is EASILY the best piece of Japanese fabric memorabilia I have owned. It is in AMAZING condition, and retains 95% of it's original paint!

All colors are VERY BRIGHT, and the typical "trainer orange" color can be seen surrounding the edges, clearly indicating it was from a trainer aircraft. Some cracks and damage due to the age of the fabric, and there are some creases from where the veteran folded up after removal, and was kept as such for 60+ years in a foot locker. Does not detract from the appearance. The previous owner incorrectly added a photo of an A6M "Zero" in the center, to indicate where the marking was located. One small chip in the frame.

The emblem measures in at almost a HUGE 3 foot (36 diameter)! Original fabric of this size is EXTREMELY rare as it usually burned up or rotted away over time. A one-of-a-kind item which would make an FANTASTIC addition to any collection or display! The Yokosuka K5Y was a two-seat unequal-span biplane trainer (Allied reporting name: "Willow") that served in the Imperial Japanese Navy during the World War II. Due to its bright orange paint scheme (applied to all Japanese military trainers for visibility), it earned the nickname "aka-tombo", or "red dragonfly", after a type of insect common throughout Japan.

The aircraft was based on the Yokosuka Navy Type 91 Intermidiate Trainer, but stability problems led to a redesign by Kawanishi in 1933. It entered service in 1934 as Navy Type 93 Intermidiate Trainer K5Y1 with fixed tail-skid landing gear, and remained in use throughout the war. Floatplane types K5Y2 and K5Y3 were also produced.

After the initial 60 examples by Kawanishi, manufacture was continued by Watanabe (556 aircraft built), Mitsubishi (60), Hitachi (1,393), First Naval Air Technical Arsenal (75), Nakajima (24), Nippon (2,733), and Fuji (896), for a total of 5,770. These aircraft were the mainstay of Imperial Japanese Navy Air Service's flight training, and as intermediate trainers, they were capable of performing demanding aerobatic maneuvers. Two further land-based versions, the K5Y4 with a 358 kW (480 hp) Amakaze 21A engine and the K5Y5 with a 384 kW (515 hp) Amakaze 15, were projected but never built.

Most of my items are vintage, and as such are AS-IS, so you must therefore expect a degree of wear due to age and/or usage. Although my passion is the Me109, I do offer many other German Aircraft Fw190, Me262, etc.

, as well as USAF and Japanese items. Occasionally I do offer many non-vintage items such as prints and art relating to the time period. Use is solely based on my authorization only. The item "WW2 Imperial Japanese Navy Aircraft FABRIC MEATBALL EMBLEM K5Y WILLOW RARE" is in sale since Saturday, March 21, 2020. This item is in the category "Collectibles\Militaria\WW II (1939-45)\Original Period Items\Japan\Other Japanese WWII Orig Items".

The seller is "messerschmitt*109" and is located in Los Angeles, California. This item can be shipped worldwide.