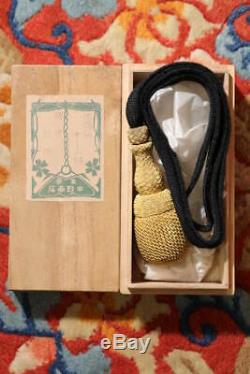 Comes in a paulownia box. The condition is completely unused, the tufts are not frayed at all, and there is almost no discoloration of the mall and it is shiny. No scratches or stains on the cord due to wearing. The paulownia box is also healthy. 95 points out of 100 points in total.

It is a sword of the 45th year of the Meiji era, and is used for normal dress, military dress, and short dress. With the revision of the Taisho era (11th year of Taisho), general officials also became gold malls. This product is a product after that, because there is no notation of "Principal official / equivalent official officer" in the paulownia box.

We do not mark merchandise values below value or mark items as "gifts" - US and International government regulations prohibit such behavior. Listing and template services provided by inkFrog. The item "WW2 Former Japanese Army Imperial General Officer sword cord FS from JPN (M2527)" is in sale since Thursday, May 7, 2020.

This item is in the category "Collectibles\Militaria\WW II (1939-45)\Original Period Items\Japan\Other Japanese WWII Orig Items". The seller is "japan_military_premium" and is located in Osaka. This item can be shipped to North, South, or Latin America, all countries in Europe, all countries in continental Asia, Australia.