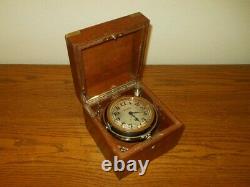 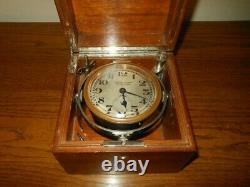 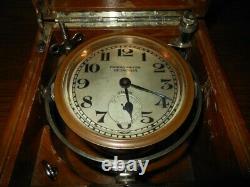 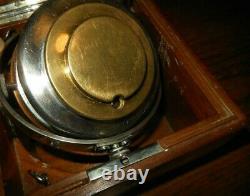 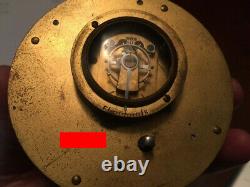 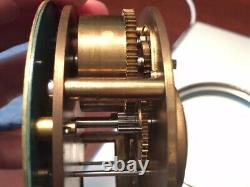 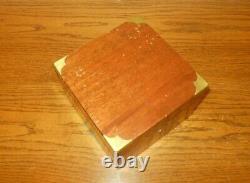 This was used on various Aircraft Carriers, Battleships, Destroyers, Cruisers, and other vessels! Full-sized marine chronometers, equipped with lever anchor and detent escapements (running for 56 hours), were mass-produced by the Japanese company Daini Seikosha during World War II.

The early versions featured the lever anchor escapement, and were completely made in Japan. They improved the quality shortly after the war began, by copying the Swiss Ulysse Nardin chronometer, and as a result, had a very high level of precision.

In total, only 600 were ever produced, with the rarer types (such as this one), only resulting in a few hundred. Very few Seikosha chronometers survived due to the almost total destruction of the Japanese Navy during World War II. It features a 12 hour display, along with a second hand. Made by Seikosha, it is 100% functional, and features the wording, "Chonometer Seikosha". Dial indicates it features a 5-day movement.

Has a counter-clockwise wind at the rear, and retains much of it's original paint and finish! Has the lever anchor escapement. Some wear to the dial as you can see in the photos.

It comes complete in a wood box, however it is not the original box to the clock. Sadly, the original was heavily damaged over time, so this one was custom-made to similar specifications to that of the original.

Comes with a winding key and locking key. Like most Japanese items, it is a VERY RARE item, perfect for any collection, or display! Most of my items are vintage, and as such are AS-IS, so you must therefore expect a degree of wear due to age and/or usage. Although my passion is the Me109, I do offer many other German Aircraft Fw190, Me262, etc.

, as well as USAF and Japanese items. Occasionally I do offer many non-vintage items such as prints and art relating to the time period. Use is solely based on my authorization only. Powered by SixBit's eCommerce Solution. The item "WW II Imperial Japanese Navy CHRONOMETER / SHIP DECK CLOCK VERY RARE" is in sale since Sunday, June 20, 2021.

This item is in the category "Collectibles\Militaria\WW II (1939-45)\Original Period Items\Japan\Other Japanese WWII Orig Items". The seller is "messerschmitt_109" and is located in Thousand Oaks, California. This item can be shipped worldwide.