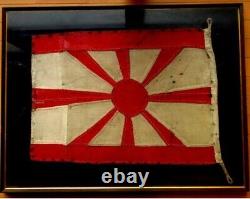 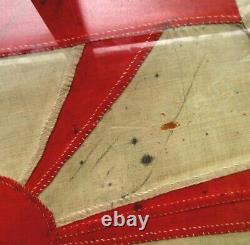 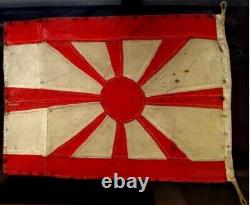 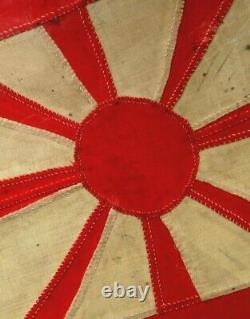 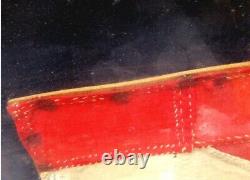 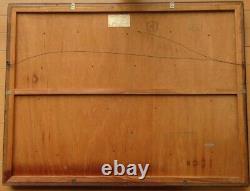 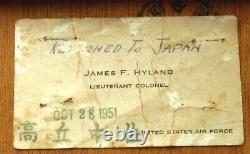 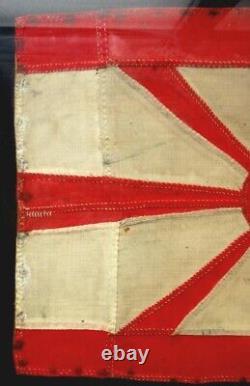 World war 2 original japanese symbol cloth. It will be a Rear Admiral flag of the Imperial Japanese Navy. The size of the frame is 93cm x 71cm. It is framed and the Rear Admiral's flag is attached to a wooden board and then the board is cut along the shape of the flag. As you can see in the image, the flag is made of a roughly sewn fabric. This is probably due to the fact that the flag was manufactured in Japan and lost for some reason. This flag was probably manufactured locally for a major general whose headquarters was located in a war zone where it was difficult to receive supplies. In addition, considering the size of the flag, it is highly likely that it was flown by ground troops.

At first, I thought it meant that this USAF lieutenant colonel gave this flag to a former Japanese soldier named Lieutenant Colonel Takaoka. However, I felt something wrong with the stamp of Oct 28 51 (October 28, 1951) in the same ink with the American style date indication. Then I thought that this Lieutenant Colonel Takaoka might be the same Lieutenant Colonel of the U. In other words, this Air Force Lieutenant Colonel, who worked in Japan and worked in a department that had a lot of negotiations and interactions with the Japanese, was not the one who was trying to get to know the Japanese in order to make them familiar with him. I guessed that he used his Japanese name in order to be familiar with Japanese people. We are sure that this is a valuable document, and we would appreciate your consideration. This item is in the category "Collectibles\Militaria\WW II (1939-45)\Original Period Items\Japan\Other Japanese WWII Orig Items". The seller is "no_spe-94" and is located in this country: JP. This item can be shipped worldwide.