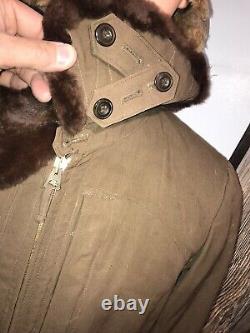 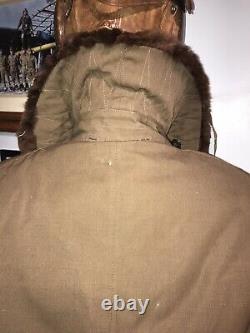 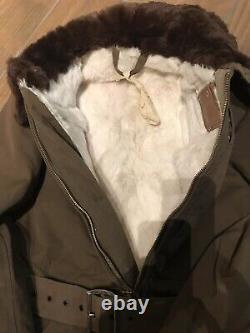 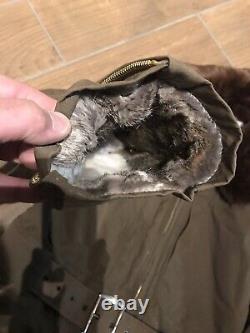 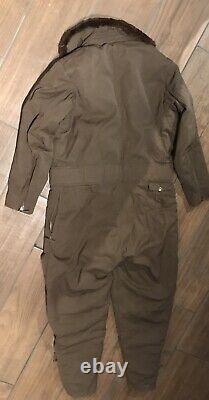 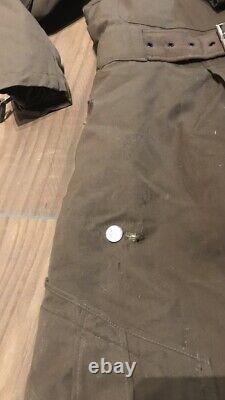 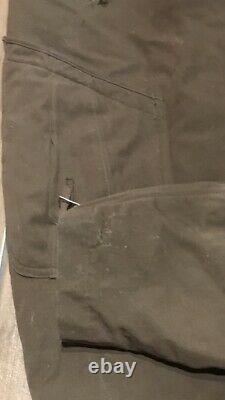 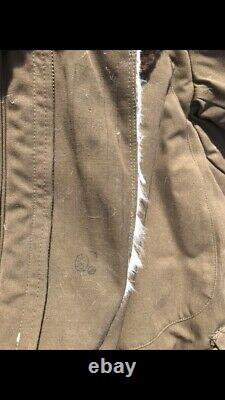 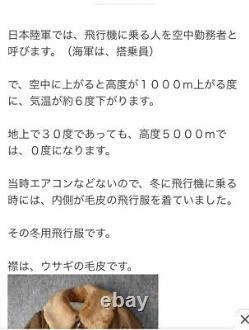 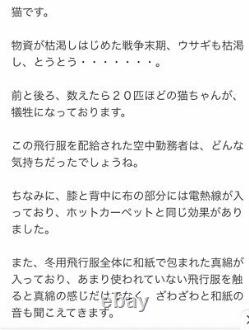 WW2 IMPERIAL JAPANESE ARMY FLIGHT SUIT. During the last year of WW2, as the B-29s were flying missions over the Japanese mainland, Imperial Japanese Army Fighters struggled into the high, cold, thin air to meet them. During the winter months, the pilots wore these Fur-lined Winter Flight Suits. Here is a great looking IJA Winter Flight Suit. What is Rare about this flight suit is its Dark Brown Collar. Most are a light tan color. It is a late WW2 example. As the war grinded on into 1944 and 1945, Japanese industry struggled to keep pace with the demands for uniforms and equipment.

Factories and rail yards were popular targets for American bombers. The strict adherence to earlier quality standards (for garments) had to change. While the Rabbit Fur Lining is intact throughout this flight suit, there is both brown and white fur in the arms and legs. Earlier Winter Flight Suits used only white rabbit fur inside. By the end of the war this went on to a calico appearance, sometimes including fur (other than) rabbit.

(See attached Japanese article) The wool gabardine exterior is mostly very good/ excellent condition. It is a larger size, as seen in the photos, on a 510 mannequin. All zippers and buttons are present and in working order. The suit shows very little evidence of wear, but does show some damage, possibly from storage. The only real detractors being a hole above the right thigh pocket and thin area at the rear-side of one leg cuff (see photos).

I have come to view original uniforms as hands-on history. This one tells the story of Winter missions at 30,000 feet above Japan, as well as the state of Japanese Industry at the late stages of the war. It is also a nice Large Size, which most Japanese pilots were not. SALE IS FOR THE FLIGHT SUIT ONLY.

Flight Helmet, Gloves, Boots, Mannequin and other display items are Not Included. The item "Rare Original WW2 Imperial Japanese Army IJA Winter Flight Flying Suit" is in sale since Tuesday, April 27, 2021. This item is in the category "Collectibles\Militaria\WW II (1939-45)\Original Period Items\Japan\Other Japanese WWII Orig Items". The seller is "97baron" and is located in West Liberty, Ohio. This item can be shipped to United States.