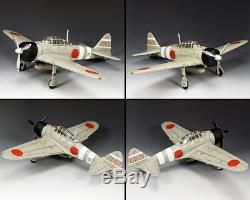 A WONDERFUL OPPORTUNITY TO ADD TO YOUR COLLECTION!! FOR COLLECTORS OF 14 YEARS +, THIS IS A DETAILED SCALE MODEL PRODUCED BY KING & COUNTRY. Imperial Japanese Navy A6M Zero. This fourth IJN Zero belongs to the IJN Carrier Zuikaku, flown by Petty Officer 1st Class Tetsuzo Iwamoto, as part of the Combat Air Patrol over the Task Force during the Pearl Harbor operation.

Petty Officer 1st Class Iwamoto already had fourteen kills claimed over China by 7 December 1941 and was ultimately credited with eighty victories by the end of World War Two and flew on Combat Air Patrol above the Japanese Fleet as it released all of its attack aircraft on an unsuspecting Pearl Harbor on that fateful morning of 7 December, 1941. Notice: Just 150 of this aircraft are being released. WE ARE AN OFFICIAL KING & COUNTRY RETAILER AND THE PRODUCT IS BRAND NEW. Be sure to add me to your favourites list. Check out my other items.

The item "KING AND COUNTRY Imperial Japanese Navy A6M Zero WW2 JN046" is in sale since Monday, January 15, 2018. This item is in the category "Toys & Games\Toy Soldiers\King & Country". The seller is "magpie25004oai" and is located in Evesham. This item can be shipped worldwide.