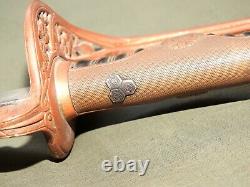 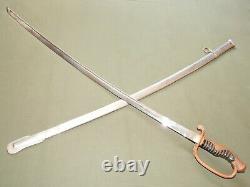 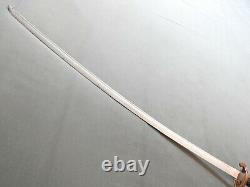 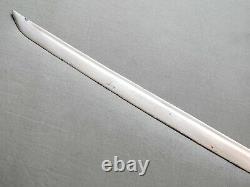 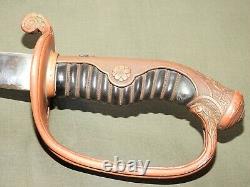 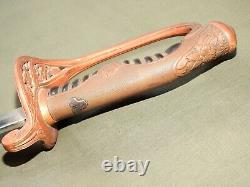 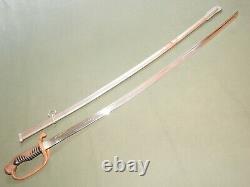 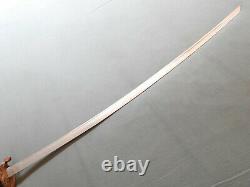 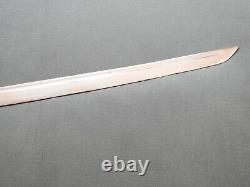 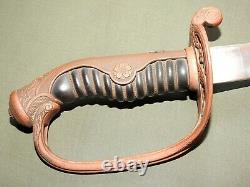 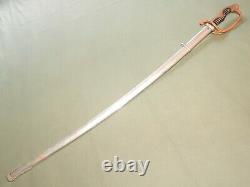 Having emerged late from feudalism, and transitioning to a modern colonial power in only a generation, Japan embarked on a path of conquest that was ended only by her defeat in WW2. Imperial Japanese Army officers carried elegant light duty sabers as a mark of rank on parade and for other dress occasions during the war. Some of these swords exhibited a "mon" family crest at the lower back strap for an officer to show pride in his heritage; when these sabers were surrendered en masse at the end of the war, the mon was often removed so as to avoid disgracing the family name. This Imperial Japanese Army WW2 OFFICER AZAI SAMURAI FAMILY MON BADGED PARADE SABER is in very good condition, with several small chips in the middle and upper blade edge, some light scratching, surface chipping, and brownish/dark spot patina at each side of the blade, some light finish abrading, patina, and loosening to the hilt, missing the "bumper" pad from the ricasso, and with some scattered age wear evident (ALL pictured). Otherwise, the saber is in fine shape, with no other damage.

Most interestingly, it bears the very scarce silver mon for the Azai clan at the lower back strap; the Azai family was an influential samurai/territorial lord clan led by Azai Nagamasa in Omi Province, Japan in the late 16th century. The saber features a 32 1/2 bright chrome plated tanto point blade with a narrow fuller for most of its length, sports a beautiful dark brown horn grip with triple brass wire wrapping, and boasts an elegant cherry blossoms embellished brass hilt with a junior officer's rank embossed along the back strap.

It's unmarked as to its maker, and is complete with the original IJA WW2 Officer Metal Scabbard in very good condition, remaining a tad small for the blade, leaving about an 1/8 space between the throat and ricasso, and with a small spot dent in the lower right front body, some patina at the lower front body, and with some scattered age wear evident (ALL pictured). Otherwise, the scabbard is in fine shape, with absolutely no cracking or other damage.

The seller is "abramsantiques" and is located in Claremont, California. This item can be shipped to United States.