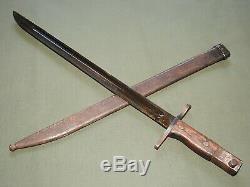 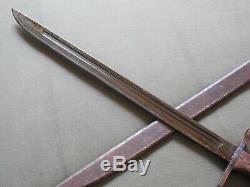 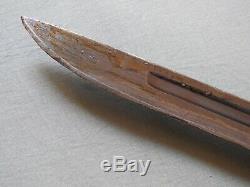 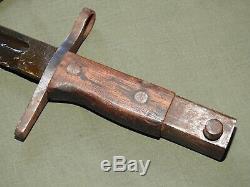 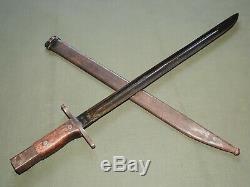 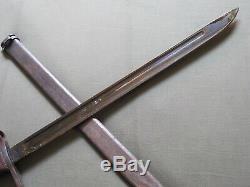 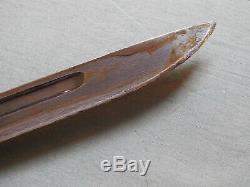 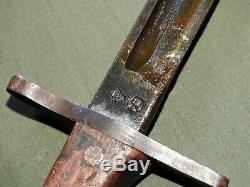 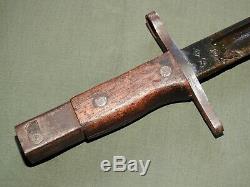 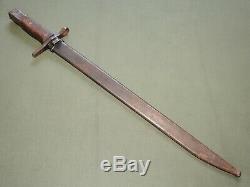 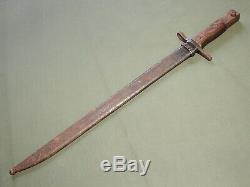 The Japanese soldier revered his bayonet just as his officer revered his Samurai sword, and Japanese troops always went into battle with bayonets fixed. This Imperial Japanese Army WW2 LATE WAR STRAIGHT QUILLON TYPE 30 ARISAKA BAYONET is in near mint condition, with some factory sharpening to the upper half of the blade edge, some light patina to the guard and pommel, and with. Some darkening evident to the handle scales.

Otherwise, the bayonet is in near mint shape, with no other damage. Most interestingly, it features a 15 5/8 fullered blade that retains approximately 99% of the original blued finish and still exhibits a ton of the original factory cosmoline to protect the steel, sports the classic late war straight quillon, and is stamped to the famous Toyoda Automatic Looms under Nagoya Arsenal supervision at the reverse ricasso.

It boasts tough, barely contoured brown hardwood handle scales secured by two simple metal rivets (without screw heads), carries a fully functional "locking lug" attachment at the "squared off" pommel, and is complete with the original Imperial Japanese WW2 Steel Scabbard in very good condition, with some overall scratching, pitting, and patina, and with some scattered age wear evident (ALL pictured). Otherwise, the scabbard is in fine shape, with absolutely no cracking or other damage, and retains approximately 60% of its original blued finish.

GOVERNMENT at the left front. The item "Imperial Japanese Army WW2 LATE WAR STRAIGHT QUILLON TYPE 30 ARISAKA BAYONET Vtg" is in sale since Tuesday, March 3, 2020. This item is in the category "Collectibles\Militaria\WW II (1939-45)\Original Period Items\Japan\Edged Weapons". The seller is "abramsantiques" and is located in Claremont, California.