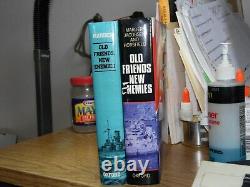 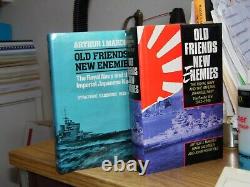 Sadly, Arthur Marder died of cancer as this volume went to print and the second volume was finished by former students. This volume covers the period from the collapse of naval arms limitations in 1936 to the sinking of HMS Prince of Wales and Repulse at the end of 1941. It is divided into three parts. The first covers the long history between the two navies and a detailed look at the stated period.

On the British side, it concentrates on the British strategic dilema of fighting a possible three ocean war with a battered and somewhat antiquated two ocean navy. On the Japanese side it follows the road to Pearl Harbor. The second part looks at the Japanese navy in contrast to the Royal Navy, focusing on ships, men, tactics, doctrine, etc. The third part is a detailed study of the short life of "Force Z" (Prince of Wales and Repulse).

The book is the expected combination of meticulous and comprehensive research, outstanding organization of material and the great readibility that Marder has shown in his other works, particularly his master piece, FROM THE DREADNOUGHT TO SCAPA FLOW, of which this compares favorably. At the end, the reader knows why things were done the way they were, especially the controversial decision to send Force Z to Singapore, and why things turned out as they did. It is the story of the British and Japanese navies and touches lightly on American and Dutch involvement.

This is a scholarly account of the Royal Navy participation in the Pacific War. Before his death, Arthur Marder completed the first six chapters, and the second volume of this work has been completed by Mark Jacobsen and John Horsfield. It picks up the story at the nadir of British naval fortunes, and follows the Royal Navy's role from 1942 to the Japanese surrender in August 1945. Marder retells the story of how Allied naval defences crumbled in the Dutch East Indies, culminating in the Battle of the Java Sea. Concentrating on the role of HMS Exeter, Marder drew upon the experiences of participants in the action to write a fresh account of the part played by Royal Navy Units in the disaster.

The book offers a critical assessment of Churchill's role in shaping the British war effort. Churchill opposed sending a major fleet to the Pacific.

THANK YOU FOR SHOPPING WITH US - WE VERY MUCH APPRECIATE YOUR BUSINESS. (note on Book Club & BOMC editions). Book Club are generally printed on a slightly small size book and lesser quality. BOMC Book of the Month Club are generally the same size and printing as a regular edition, just added to production run for BOMC club- but same quality. Due to increasingly higher U.

We do not mark merchandise values below value or mark items as "gifts". And International government regulations prohibit such behavior. If you have further questions - happy to answer them. Please browse our other items and bookmark our site - we constantly add new items. We pack your item extremely carefully so you will receive it in the best condition.

This sometimes causes us to be a day or two late in processing orders if we have a good number of sales as we normally only drive to the Post Office on Monday, Wednesday & Friday. Please be patient- we aim to provide the best service we can. We have been in business 50 years. Please be aware that the binding glue in vintage paperbacks is likely to be much drier than newer books, and thus more fragile than more modern printings.

Paper also can be sometimes somewhat brittle. WE HAVE NO IDEA HOW FAST THESE NEW RATES WILL ACTUALLY BE, SO PLEASE BE PATIENT.

Media Sometimes is taking 1 to 4 weeks with no rhyme or reason as to why. IT WILL TAKE AT LEAST THE TIMES STATED ABOVE.

The item "Br- Old Friends, New Enemies The Royal Navy and the Imperial Japanese, HBdj VG" is in sale since Tuesday, July 30, 2019. This item is in the category "Books\Nonfiction".